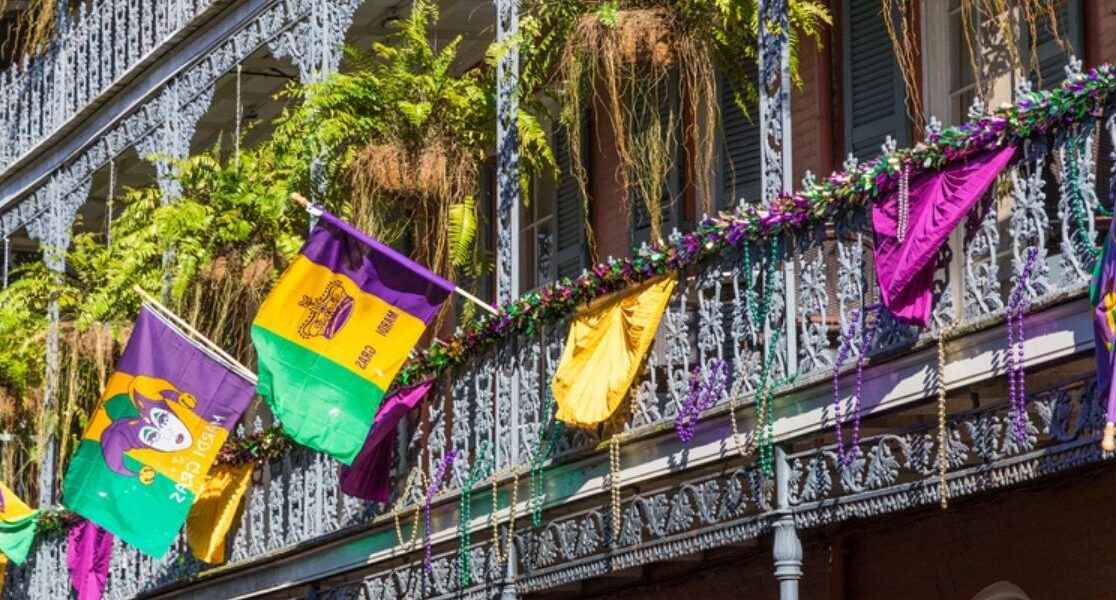 Mardi Gras and The King Cake

Fat Tuesday happens on the last day of the Carnival season. It is the day before Ash Wednesday, which is also the first day of Lent. The Christian observance of Lent signifies the forty days that Jesus spent fasting in the desert. They mark this time by giving up some of their favorite things to eat or drink. If you are a devout Catholic, Fat Tuesday is the last day to whoop it up before depriving yourself for forty days. This year it falls on March 1st, 2022.

According to Mardi Gras New Orleans, “The origins of Mardi Gras can be traced to medieval Europe, passing through Rome and Venice in the 17th and 18th centuries to the French House of the Bourbons.” When we think of Mardi Gras we clearly conjure up images of the elaborate parade floats rolling through the French Quarter in New Orleans. We picture crowded cobblestone streets, the wrought iron balconies filled with bead throwers, and the sounds of ragtime and jazz music. The epicenter of it all takes place on Bourbon Street.

Contrary to what many people believe, Mardi Gras did not originate in New Orleans but in the port city of Mobile, Louisiana where many of the French Catholic settled in the 1800’s.

New Orleans is known for its culinary delights. What is a trip to the city of New Orleans without enjoying a sugary beignet from Cafe Dumonde while sipping on a Cafe au Lait or a chicory coffee? This establishment has been in the city since 1862.
According to Cafe Dumonde, beignets were brought the the region by the Arcadians (Rural French from the western Pays de la Loire region) we know their food style as Cajun. The beignets like all things have adapted over the years from a fruit filled pastry to a square of deep fried dough sprinkled with confectionary sugar. Yum!

When we think New Orleans we also think of Creole cuisine at its finest. The early Spanish and French, known as Creoles, who settled in the area brought their cooking methods and their spices that make up the hearty braised meats and stews that are typically served with rice. The most popular dishes are Jambalaya, Red Beans and Rice and the famed Crawfish Etouffee.

When you visit New Orleans you will quickly forget the notion that dessert has to be a big piece of chocolate cake. When it comes to desserts the French are the experts and that is no exception in New Orleans. Here the French Creole desserts have a more down home feel with sweet creations such as bread pudding and pralines. These simple dessert ingredients are easily transformed into elegant dishes. Flaming bananas foster steals the show during the final course in some of the areas best restaurants.

Even the famed colorful, tasty King cake is a basically comprised of a big ring of cinnamon rolls with colored sugar and icing. That being said, all of these desserts are a fantastic way to experience a little culture.

Who doesn’t love seeing a colorful King cake decorated with coins and beads sitting on the table during Carnival season?

The colors of the cake are purple, green and gold. The purple color stands for justice, the green depicts faith, and the gold signifies power.

The beads worn by the Mardi Gras parade goers and that are often draped around the cake emulate the high fashion jewelry worn by the wealthy aristocratic women that walked alongside the floats in the 1800’s.

In earlier years parade floats used to throw colored almonds into the crowds.

At one Carnival celebration, a group riding on a float tossed out full sized coconuts. Can you imagine getting hit with a flying coconut?

The baby displayed on the cake symbolizes the revealing of the Christ child. In Christianity, the day called Epiphany is the day when the three wise men made their way to Bethlehem with the offering of gifts to the newly born Jesus.

If you are looking for a King Cake this Carnival season, you do not have to travel to New Orleans, local bakeries like Mica’s Sweet Treats will be offering the sweet traditional cake throughout the month of February and into March.

If cake is not your thing, you could still celebrate carnival with some colorful Mardi Gras style cookies or the Bananas Foster Cocoa Bombs. Why not include the kids? Let them decorate the cookies with the purple, green, and gold colors. What a fantastic way to teach children about New Orleans, the history and traditions of Carnival, Lent, and Ash Wednesday.

Mica’s Sweet Treats is an established award-winning home bakery located in North Raleigh. After just three short years in business Mica’s Sweet Treats has 5 employees. You can also find them every weekend during the summer at the Midtown Farmers Market located in the trendy North Hills of Raleigh, NC.