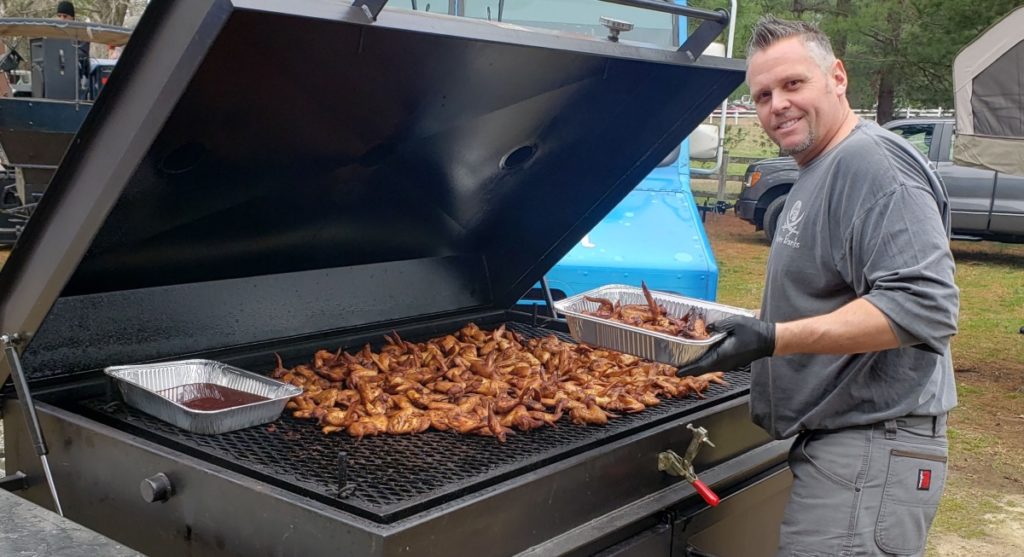 A Spring BBQ Contest and a Pig Pickin

It is springtime in the south and nothing says spring has arrived better than the number of outdoor fun-filled, food events in March.  We started the month by attending Jimbo’s Annual BBQ competition. It is held just up the road from me at Stonewall Farm. The proceeds from the event in 2018 went to Operation HomeFront helping local military veterans. This year 2019 it will go to Carolina Calvary who was formed to help the NC hurricane victims.

We thought we would pop in for a quick pulled-pork sandwich since we had reservations for dinner later that night. Ha, lol, let me tell you that for a mere $20.00 donation we sampled over 20 types of bbq goodness. Sample sizes were large enough to plate a full sandwich. We decided as soon as we tasted the first sample that canceling dinner reservations that evening would be a wise decision.

It wasn’t just lots of food, it was really good quality BBQ. This is a pitmaster competition to outdo the other contestants for the accolades and small cash awards that come along with them for the best-smoked pork, chickens, ribs, and brisket. These people were serious and it showed. Many had to arrive up to 30 hours ahead of time to set up and start their cook.

They had all kinds of camping trailers, fire pits, music, lights, and outdoor kitchen setups. We saw blenders, food processors, cleavers, and some serious chopping blocks. They came as families with their kids, spouses, and even some four-legged friends. At one of the set-ups called Pappy’s Legacy BBQ out of Four Oaks, NC we realized it was two young teen boys who smoked the delicious pulled pork. They do this to honor their grandpa and apparently, they are not novices to this circuit. Their mom was present, but in the background to supervise from afar. Their BBQ was very good and there is no doubt in my mind that these boys will have their own cooking show one day.

The smell that was wafting through the entire event was incredible. If you have ever smoked anything you know the aroma that one grill produces. Now multiply that by 36. What they were using to smoke was very different from each other while some mixed the woods, others used no wood at all – just charcoal. Some were smoked on more traditional smoker grills and we even saw contestants that had 50-gallon drums turned upright with cool paint on them.

We had the opportunity to chat with the pitmasters about their techniques and equipment they use to learn why they selected it. We got to hear how vested they are in this competition. One man told us that it cost him $1000.00 to be there. A few were being sponsored by charcoal companies and some by the companies that make the sauce and rubs. It was fascinating for me to learn about this subculture.

Aside from all the amazing pulled pork we also had chicken wings, brisket, slaw, and some greens. We drank craft beer from a local brewery and listened to some great live music. We made our way around the event and stopped at some vendors selling their handmade wares. I bought a welcome sign for the front of my house. We were so full when we got home, we did not move from the couch. Looks like the big winners, were Fat-Heads BBQ, Smoke ‘n’ Barrels, and North Meets South.

All in all, it was a great time and we will be going back next year for sure!

Two weeks later it was time to attend another outdoor event. This time the weather was milder and the sun was bright. This was tailgate/pig-picking to celebrate with our friends for the 4th-year business anniversary of D’s Bottle Shop. The guest of honor (the pig) arrived already smoking on the grill being pulled by a pickup. I love the south! (sorry I was not there early enough to get the picture of it before it was hacked up.)

Dee and Allison were busy chopping Q all afternoon while Susan and Russ poured beer with a smile for all the guests. The live music was played by Lake Chamberlain. Our friend, John, is in the band. I got some videos of them and they were fun to watch and listen to.
People danced and relaxed in the sun, filled their bellies with pulled pork sandwiches with slaw (I made an Eastern NC vinegar-based BBQ sauce to share) and my friend Aaron made his amazing fermented BBQ sauce (I hope one day he will share the recipe with us).

All in all, it was a great way to start the spring season with full tummies, good memories, daylight savings, warmer days, blooming flowers, and outdoor fun food events. 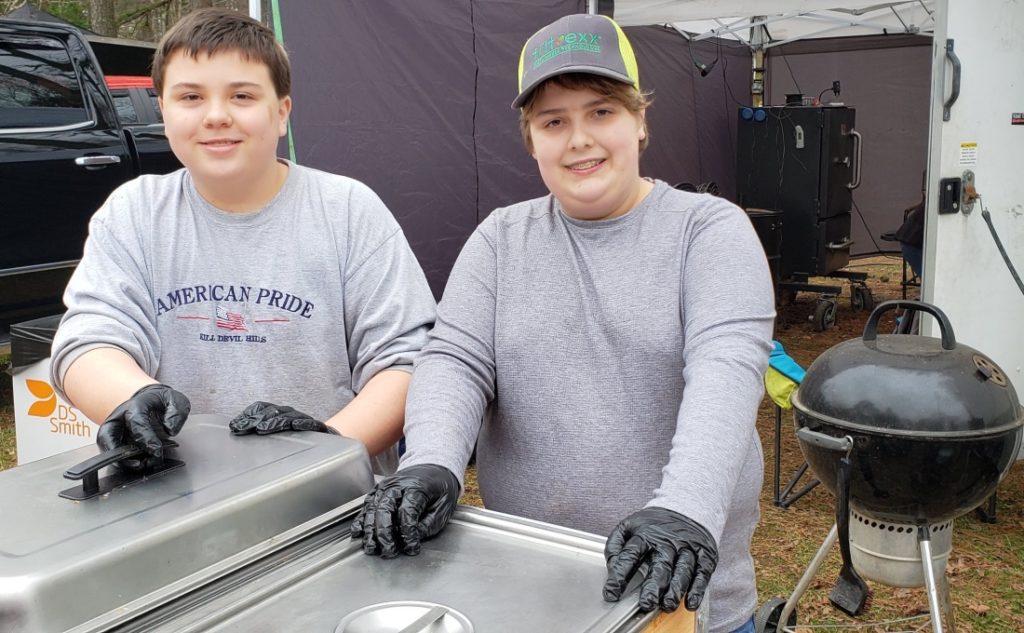 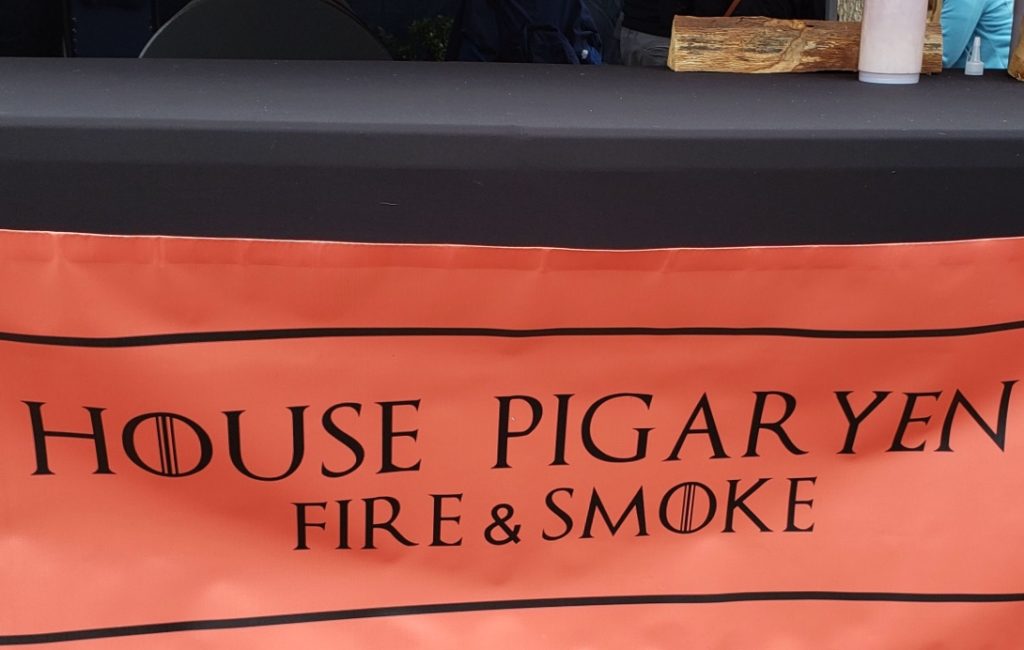 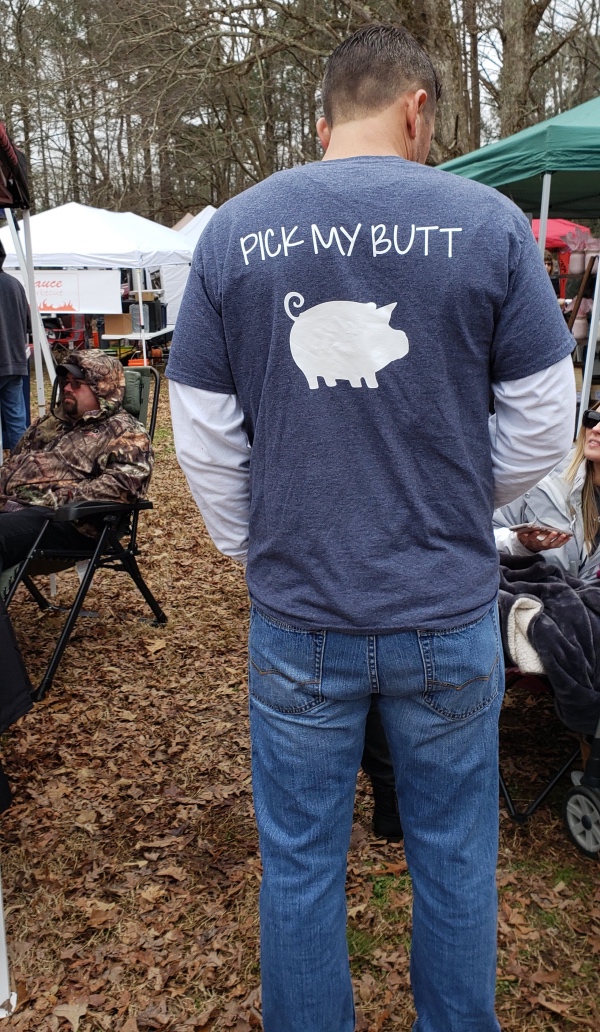 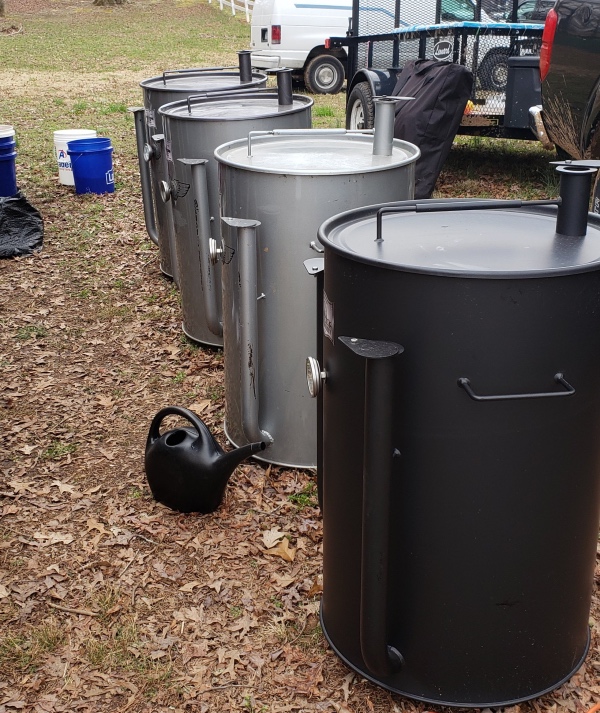 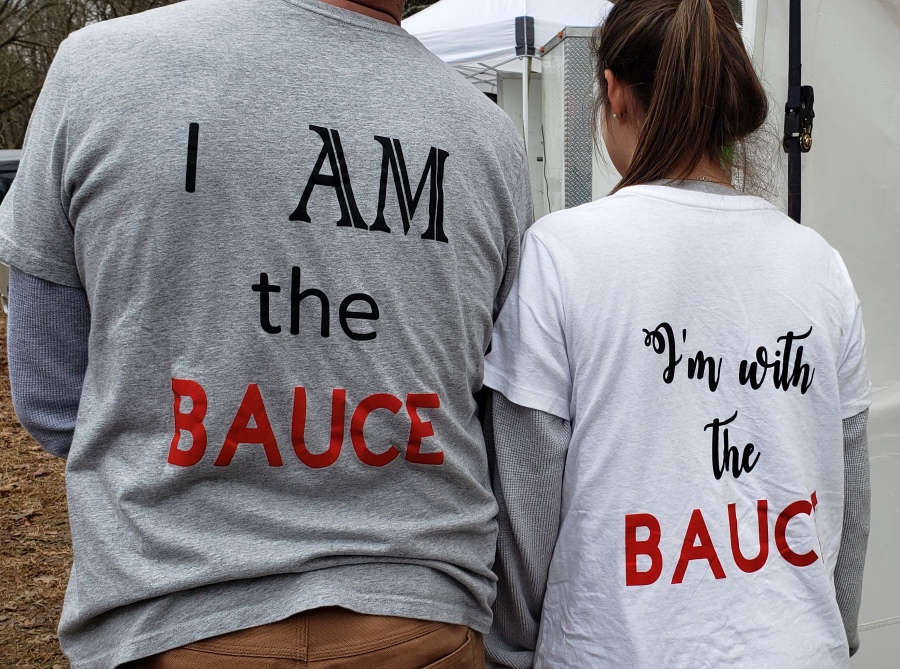 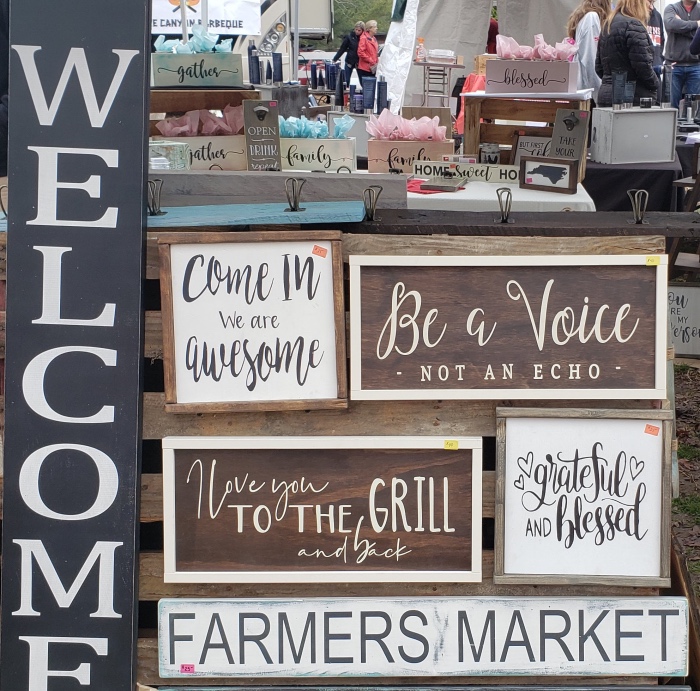 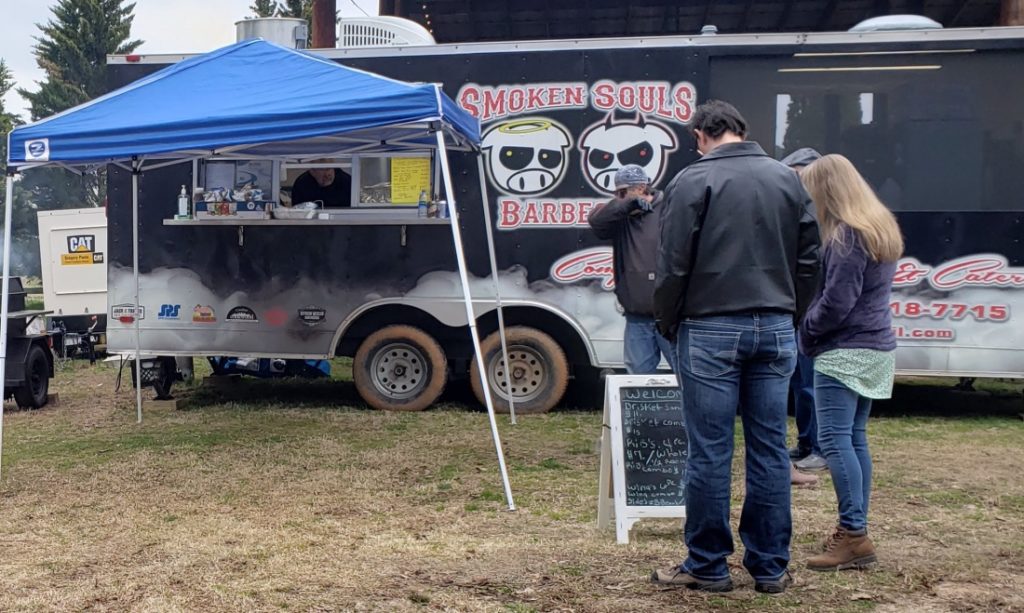 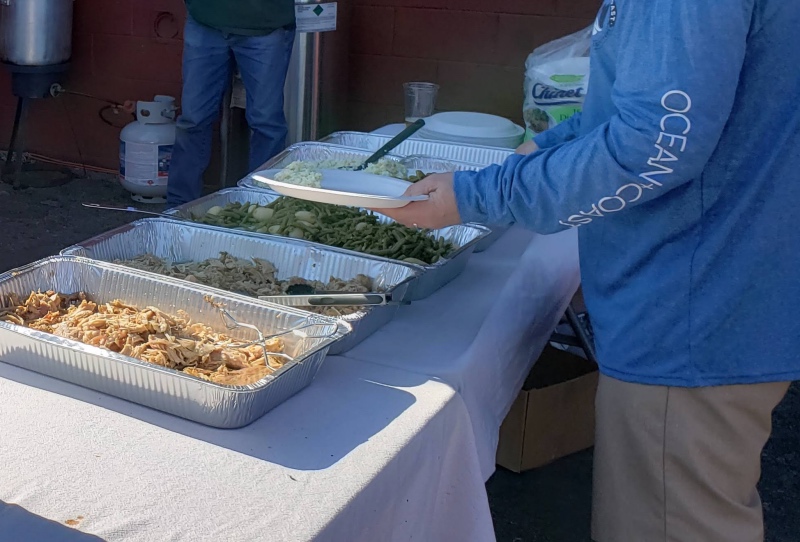 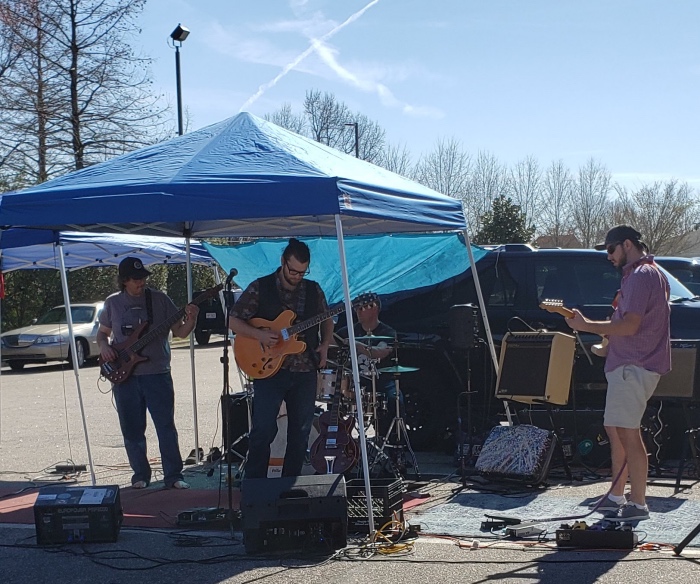 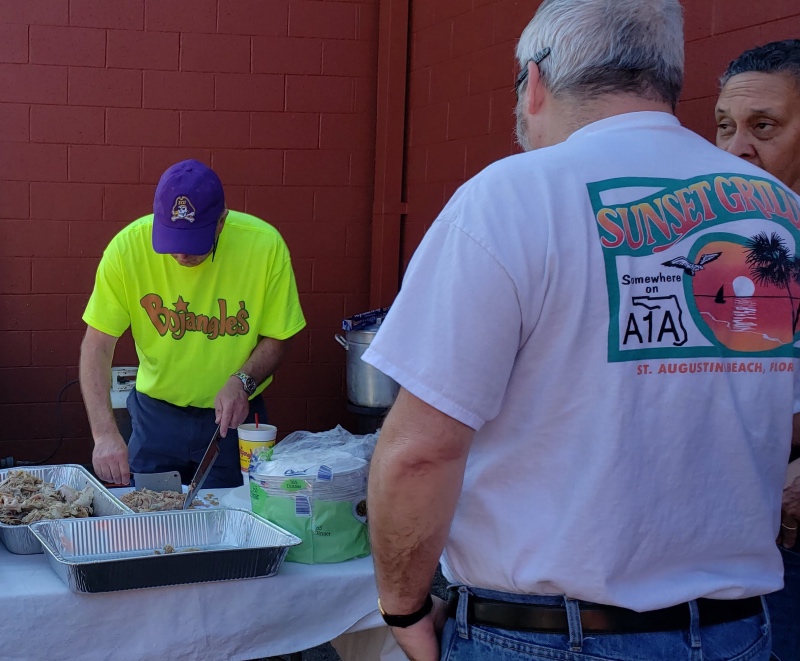