Dinner in the Meadow

A Dinner in The Meadow

Have you ever wondered what it would be like to dine on exquisite cuisine, prepared by expert chefs from your local area, in the middle of a meadow, on a farm, out in the country just as the sun sets?

I used to imagine what this magical experience would be like and recently I was fortunate enough to be able to experience it for real.

My foodie friends, Allyson and Richard, invited us to attend this event with them. We had to purchase tickets in advance as this fun evening sells out quickly every year. I now understand why. As we pulled up on the grassy field to park our car we could see the big white tents set up strung with thousands of little lights. I knew it would look even more gorgeous once the sun finally set.

The sounds of bluegrass and country music as well as a compilation of fresh foods prepared by some of the areas best local chefs were the highlights of our late summer evening. There was more, a silent auction followed by a live auction event with one of the best bid callers rattling off items and calling bids faster and with more vibrato than I have ever heard.

As we approached I was giddy with country-girl delight when I saw that the tables were draped in checkered tablecloths.

In the middle of each table sat centerpieces made from local blooming sunflowers and zinnia. These are two of my favorite flowers, followed by various daisy varieties. Laid out on the table was also a flyer with all the information about the evening, what we could expect, and the menu of the foods that we would soon be enjoying. A printed bamboo fan sat spread out on my plate to use until the hot-southern August sun would drop below the tall pine trees off in a distance.

My eyes widened as I saw the heaping pile of freshly-harvested steamed shrimp over ice, being fanned by the waitstaff to keep it cool and ward away any pesky insects from landing. That shrimp would be my first stop as I loaded my little appetizer plate with delights such as local goat, sheep, and cow cheeses. My favorite was a creamy textured Humboldt fog with an ash rind.

Pieces of crusty bread in several forms were piled high on top of the artisanal cheese on my little plate.

After the appetizers and the small talk with our guests at the table was complete, I became impatient to know what else was going on. I made my way around through the silent auction items. I stopped to thank the staff who were dedicated to fanning the shrimp even though they themselves were hot from the steam swirling about them in the August air.  I looked over at the other end of the tent and I could see the chefs finalizing their stations.

The venue was not yet officially serving the dinner but there was no harm in walking through just to look right?

As I slowly strolled past the first few tables, I quickly realized it was a rare opportunity to chat with the chefs who would soon be busy spooning and plating. The chefs were proud of their food and eager to have someone taste it so I obliged their requests. I took photos in between bites and learned about their various cooking techniques.

One of the stations had a very large leg of beef.

I got the first taste of it, of course. And since it was the first cut, it had all the seared, peppery, crusty seasoning on it. Yum!  I made my way by all the stations to take in all the well-prepared cuisine, fresh from the farm in all styles French, Asian, Latin, Southern American and more.

Morning Joe- A Poem and Recipe

There were dishes made from farm-raised goat, beef, pork, lamb and served multiple ways. Large serving plates adorned freshly picked vegetables of beets, summer squashes, sweet potatoes and some of the best-roasted pumpkin I have ever had.

Toward the end of the evening, I swung by the station that had the big leg of beef as I was curious to see what kind of dent we had all made into that giant carcass. I took an after photo so you can see I was not alone in thinking it was fantastic. Apparently we all gave that beef station it’s justice.

With our bellies full, the action over, the sun was setting, and the live country music was taking us all further into a food coma so we knew it was time to make our way out of the meadow and down the long windy country road back to reality. It was a fun food event and I look forward to attending again next year. 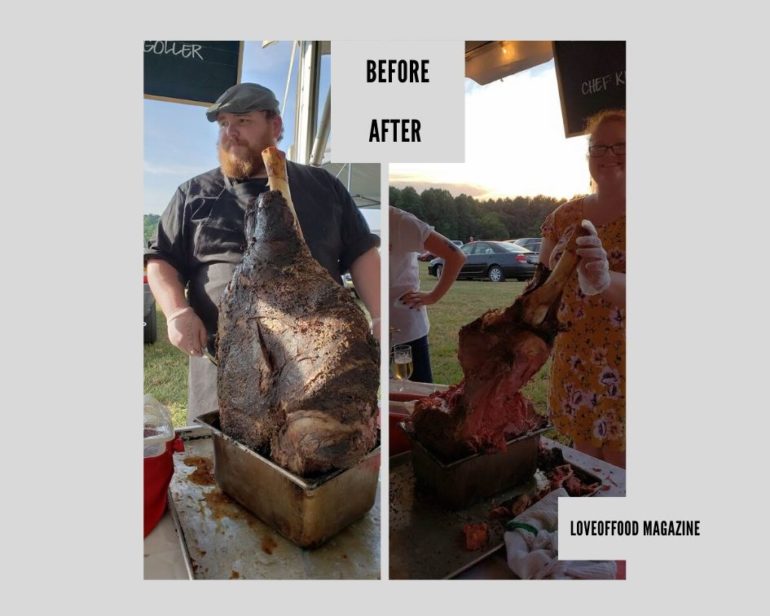