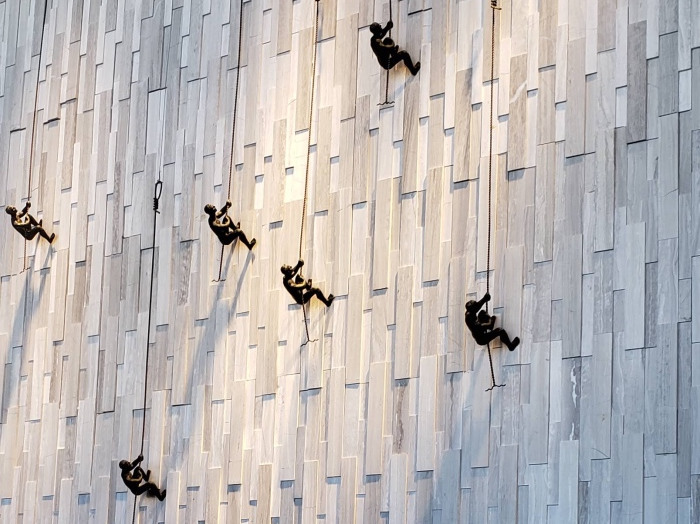 I was inspired to write this piece by a random lunchtime restaurant visit to a place that a friend recommended. I happened to be in the Morrisville area for a client meeting on a weekday and was quite hungry. I thought “what a great time to visit this local establishment, maybe take a few pictures and review the food”. I had no idea of the journey I was about to take learning about Chinese customs and art. I entered G58 Modern Chinese Cuisine and asked the hostess if I could be seated at the bar as I snapped a photo of a cool looking wall, with absolutely no idea what it was about, I casually mentioned to her that I have a food blog and asked if I could be permitted to take a few pictures.

Amanda, G58’s Hostess, is a young Chinese woman from Shanghai. Her warm accommodating nature and bright smile were what we first encountered. She has a wealth of knowledge about the Chinese culture and how the art displayed around the restaurant tied into many important facets of G58. I would later learn that this wall represents the human struggle to achieve goals.

As I sat at the bar trying to decide which amazing dish I would have for lunch she explained that the chefs that work here are Master Chefs in China and came to the US to work in this restaurant. I realized that I was in for an experience that is hard to find outside of Las Vegas, New York, or Chicago.

Amanda announced she would like for me to try some tea. Serving tea in China plays a big part in their social etiquette. She said the tea she serves is imported from China, that it not only tastes good, but it is also served with health in mind. I selected the Jasmine Tea from Fu Jian, Province which is on the southeastern coast of China, situated opposite the island of Taiwan. The fragrant tea sits in a strainer at the top of the pot as the steam steeps its flavor into the water. The cast-iron pot sits on a warmer.

While pouring over the lunch menu, I wanted to taste everything. I lamented over what I wanted for lunch so long that I decided I would simply start with an appetizer and just see where my hunger landed after that. I made the right decision by ordering the pork and beef pan-fried dumplings. When the dish arrived I knew I was in for a treat, this was no ordinary Asian dumpling. They were joined together in the pan with the batter poured all around them. It looked like a big flower made out of fried goodness. As I cut into the first dumpling it was warm, moist and most of all flavorful. I dipped the dumpling in a ginger soy sauce, as is customary.

For my main course, I ordered the pan-fried noodles with shrimp and beef, knowing that I would be taking some home for lunch the next day. The beef was tender and seasoned perfectly and the shrimp popped with freshness, I think the shrimp was the best I have ever had. Both were cooked to perfection along with the delicate noodles which I ordered minimally spiced. This dish came through with enough kick and flavor without the need for any additional spice.

I Found Love Where I Least Expected-NOFO @ the Pig

When my lunch was coming to an end, Amanda informed me she would provide a tour around the restaurant to see the formal and private dining areas and talk with me about some of the art that is displayed.

The best was yet to come as Amanda explained the art, its culture, it’s interpretations and even some of how it is made. You will definitely want to watch the videos below to hear her tell us what she knows about each piece. She will take us through the Dynasty Dolls which are made to represent each dynasty. The Climbing Wall, the Mural made of Colored Pins, The Silk Lotus Chandelier, The Mural of the Chinese New Year, The Needlepoint, The Five Lions, and the last and most impressive Dragon and Warrior Sculpture made from food-grade materials.

Check out this wonderful restaurant for your self at 10958 Chapel Hill Road in Morrisville, NC.