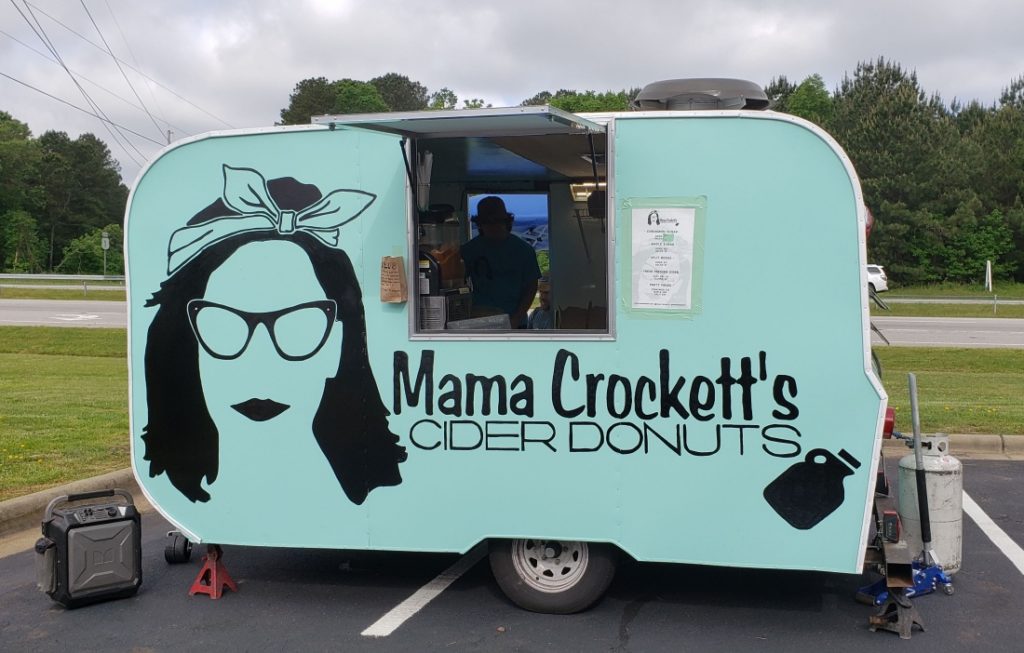 I love a “pop-up” anything from a shoe sale to a brunch. Advertise a pop-up event and I will be there. When I saw a Facebook post for a pop-up donut truck called, Mama Crockett’s that was coming to my little town, I wanted to show up, support this entrepreneurial venture, and see what the hype was all about.

Based on the name, I expected to roll up and see an older, southern, country-woman making or selling her donuts. I couldn’t have been more wrong.

As I pulled into the parking lot I saw the cutest little aqua-colored trailer with a huge black logo of a woman’s face on the side, apparently the profile of Mama Crockett. As I approached the trailer I heard speakers blasting out these really cool vibes.  I was a little confused as this did not seem like the music genre choice for a little old mama. In the past, I have heard older people grooving to the tunes of Etta James or Patsy Cline but not this hip jam! Rarely do little, old ladies listen to music at that decibel level, unless of course, they are hard of hearing.

Instead of seeing a gray-haired, frock-wearing, elderly woman in the trailer, I observed two young men moving very quickly inside prepping, cooking and boxing the donuts. Maybe these were her grandsons? After all, I have seen the resurgence of young people in the culinary world who are carrying on their parents or grandparents legacy. We recently tasted some great barbeque prepared by two pre-teen boys at a BBQ competition. They aptly named their company Pappy’s Legacy in honor of their grandfather competed before them.

Assuming this was the case with Mama Crockett, I abandoned all my preconceived notions and settle into the fact that I was about to experience something a bit different than I had originally thought. When I asked about who owned the company I was introduced to a very nice third young man who informed me that he and his partner own it together. So who is Mama Crockett I wondered? The owner offered me a free cider slushie, I thought why not! I am still a little confused after all what is a cider slushie? One sip gave me a basis for everything I would need to know about Mama Crockett’s. Apparently, they own a cider press facility and every day the cider is pressed fresh, ergo the premise for the cider donuts and the cider slushies. This tart and sweet beverage tasted so cool and refreshing that I may have to figure out how to recreate this drink. (Sorry I sucked this drink down and did not get a photo, but trust me you want to try this.)

As I sipped, I gave the menu a quick glance to figure out the donut flavor choices and scanned the prices. It appears that there are only two flavors offered cinnamon sugar or maple sugar. The price was reasonable, thirteen dollars for a mixed dozen. I ordered two dozen, one for us and one for my husband’s office.

Who doesn’t love a good fresh cider donut? These round, deep-fried pastries did not disappoint. The cake style donuts are made with that freshly-pressed cider added right to the dough. In my opinion, this made the donut itself less sweet than most perhaps even added a bit of tartness. While they are still hot from the oil, these little lovelies are rolled and covered in a mixture of cinnamon sugar, or maple sugar. This gave the savory donuts just enough crispness and sweetness to excite my palate.

I later read that they are from Lynchburg Virginia where they have a storefront. Can you say road trip? It would be totally worth it!  I also read that Mama Crockett’s name and logo are a bit of a mystery. Maybe just some great marketing, who knows? I enjoy good quality, interesting food and also appreciate good marketing, so all is well with me and Mama Crockett’s cool brand. Check them out next time they roll through your town or get over to Lynchburg, maybe I will see you there! 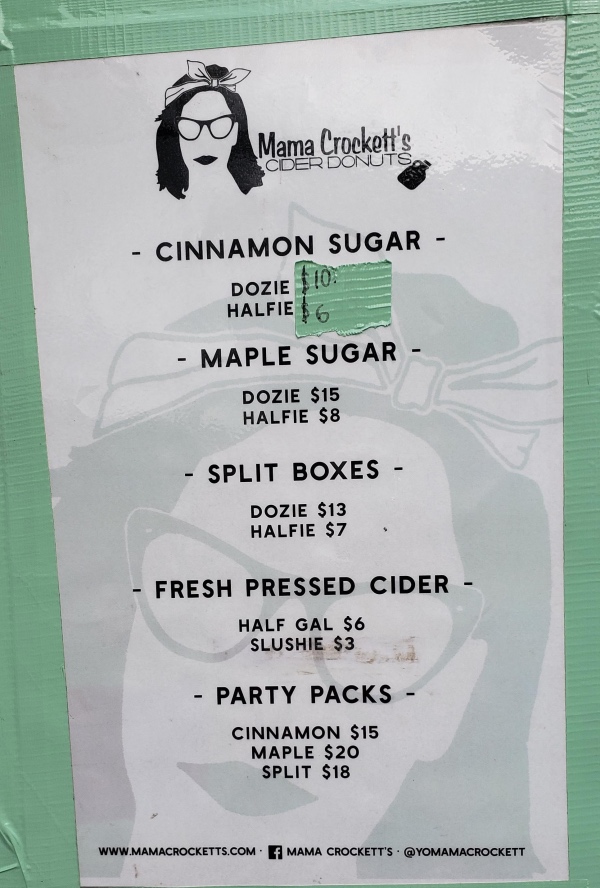 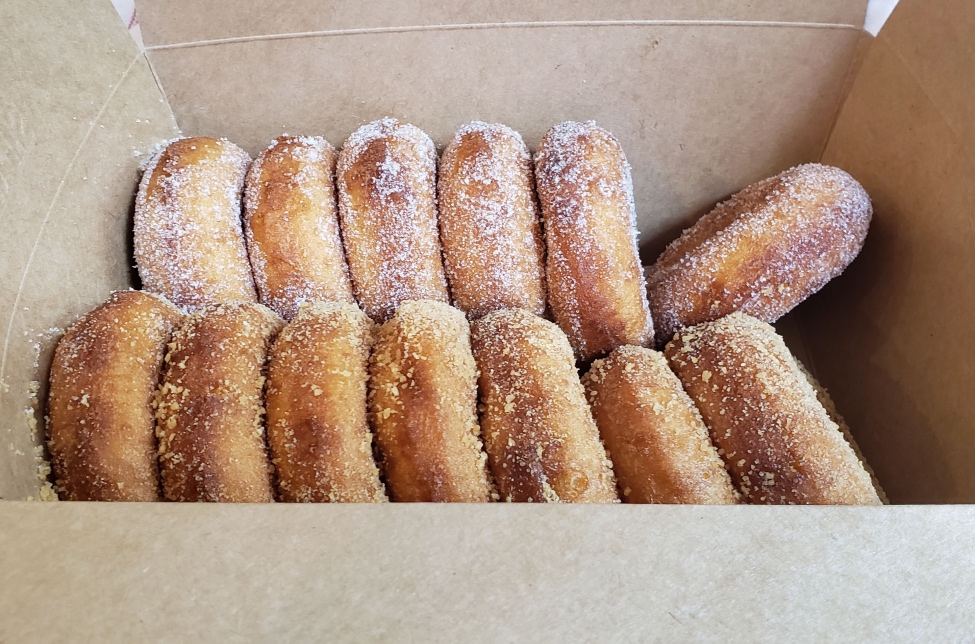 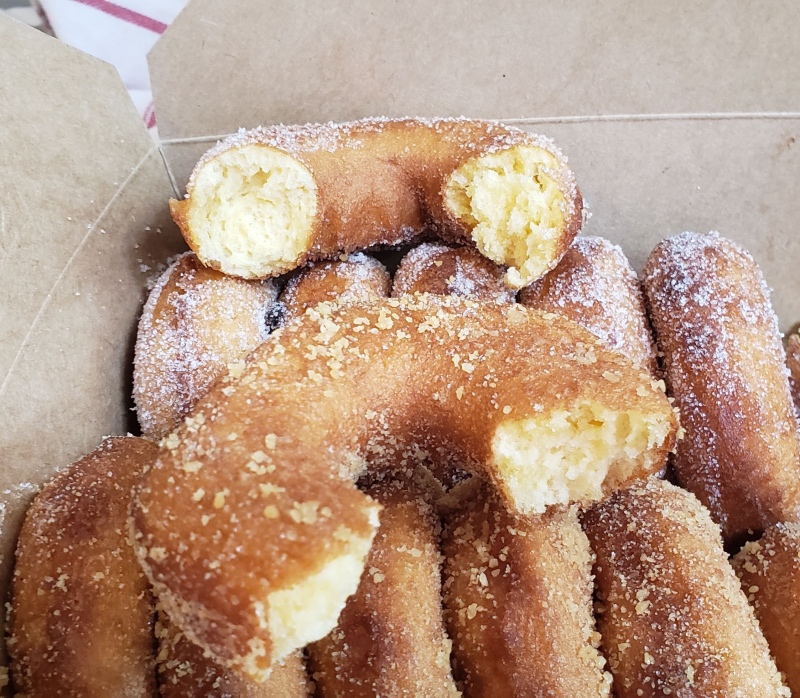