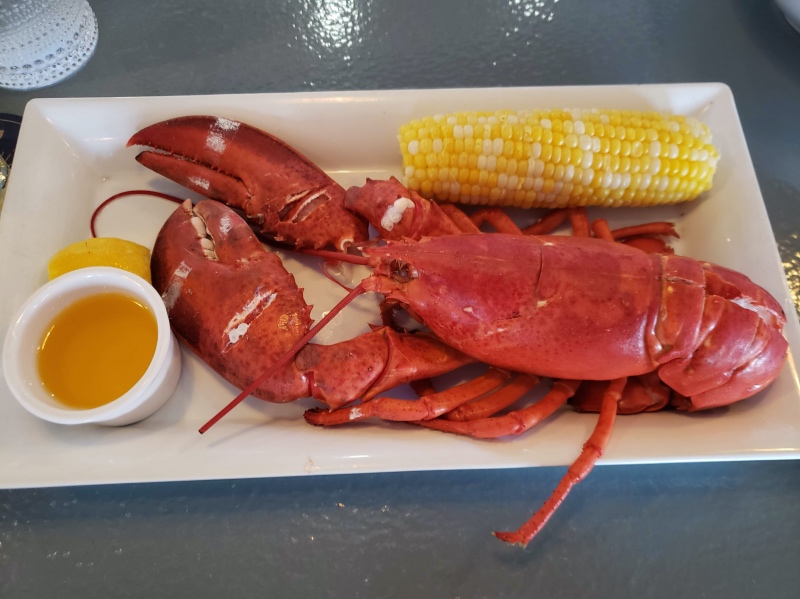 Lobster is very special to us. Rob and I got married in a little seashore town in New England on the 4th of July. We followed in the footsteps of my parents who were also wed on July 4th many years ago. We had an amazing wedding and lots of shenanigans back at our home with a clear view of Boston Harbor and the Fireworks. On our first wedding anniversary, we served lobsters to our guests as a way to celebrate a fun day of independence and of unity. That is how our tradition began. Every year for over fifteen years on our 4th of July Anniversary, we treat a small group of special guests to a lobster feast.

We enjoy all that the holiday has to offer complete with red white and blue decorations, colorful fireworks that illuminate the sky, and we tip a glass of champagne or two and toast to our union, our years of marriage with hopes of many more to come. Sometimes there is even Jello Shots, thanks to my friend Allyson. This year it was a smaller group due to Covid-19 but we managed to have a great time and we even had a chimichurri sauce for our lobsters compliments of Chef Ana Claudia Tapioca of Global Comfy.

Year-round we have lots of fun around lobster. We pay homage to this favorite sea creature on National Lobster Day. I went to Harris Teeter to partake in their celebration of the day and have my picture taken with a mascot lobster. I found this cool Friend’s inspired tee shirt for my dog., why? Well because he is my lobster! I was recently reminded that I also dressed up my dog in a lobster costume on Halloween a few years back, he did not seem amused.

How Many Ways Can You Prepare the Leftovers?

On Mother’s Day this year, my daughter sent me two lobsters and challenged me to see how many ways I can prepare the leftovers. I will show you some of the pictures of what I do with my left overs.

The History of the Lobster

In the late 17th century and throughout most of the 1800 lobsters were abundant and would pile up on the seashores. Because lobsters are considered a good source of nutrition they would be used as food for children and the incarcerated. They were the ultimate poor man’s food and were sold in a can much like tuna fish or sardines are today. It was not until the 1800’s when the railroads started serving it to inland customers did lobster become a sought-after delicacy. Today lobster is more difficult to harvest therefore most seafood loving people select it when they want to treat themselves.

Growing up in Boston we were spoiled by the abundance of fresh seafood. When you live near the cold ocean waters of New England everyone knows someone who has lobster traps (or pots as they are also called). On a clear day, lobster boats can be seen moving around the shorelines and by dusk, they line the harbors with all the wooden traps stacked high on the back of their boats with large nets hanging on poles. These lobstermen mostly wear brightly colored weather slicker overalls and suspenders with big rubber boots. You can see them clearly from far away.

They pull their boats into the local docks in small towns and the large cities to sell their daily catch. Many sell more than just lobster as they can drag a net and catch other wonderful sea treasures. This is the freshest way to purchase lobster. There is no comparing the freshness of the meat when it has been pulled from cold waters earlier in the day. All over New England, you will find harbor town eateries serving up all that these boats had to offer from the sea. Crabs, shrimp, lobster, clams, scallops, and fresh fish of all kinds.

When you are sourcing lobster you want to make sure they are alive before cooking. The more active they are, the fresher they are. Do not put your live uncooked lobster into freshwater, they will die. If you are not cooking them immediately, place them into the refrigerator’s vegetable bin with some damp (not wet) newspaper or towels.

North American lobsters (shown above) are the ones I am most familiar with and they are different from the ones you will find in the Caribbean and warmer waters, those are called Spiny Lobsters or Rock Lobsters (shown below).

Should You Select a Male or Female Lobster?

Lobsters are either male or female and why should you care? The females actually have more tail meat. So how can you tell what sex lobster you have? Flip it over, the female has little soft feathery feelers that cross located on the body just before the tail section, while the males are also located before the tail section the male lobster’s feelers will point up toward his body and will have a harder spine-like texture.

If you wait until after they are cooked to find out if you have a male or a female lobster, you may find a red or orange like waxy substance inside the tail. This is a female’s eggs or roe as they are called in the fish world. Finding a green substance in the tail area has nothing to do with a lobster’s sex, The green stuff is actually a gland that functions as the lobster’s liver and pancreas, it is called the Tomalley. Some people love it and swear it has an appealing peppery taste. Some cooks will prepare a compound butter using the lobster tomalley. According to Seafood Source. com the FDA warns against eating the tomalley when the lobster is harvested from an area known to have a red tide breakout. Red Tide occurs due to an algae-bloom that produces high levels of PSP toxins it can remain in the tomalley even after cooking. As a general rule, I do not eat it, nor would it likely be served to you in a restaurant.

Lobsters have a hard exoskeleton and therefore need to molt their old shells as they grow. Adult lobsters molt approximately once per year. The water temperature may trigger this. In New England lobsters typically molt in the summer months since the water is a bit warmer. Molting is apparent to us as consumers when we try to crack the shell. If the lobster is difficult to crack it has not been recently molted, however when the shell is a bit softer to open it is because the lobster is growing new layers of shell.

Which is better, a soft or hard shell?

A soft-shelled lobster will contain more water and less meat. The hard-shelled lobster may be harder to open but it will yield more meat and have a deeper flavor. A fun fact, lobsters not only regenerate their shells but can grow back limbs and even their eyes. Wow!

Growing up, we of course ate lobster mostly in the summer when they could be steamed or boiled. However, these little lovely crustaceans also made an appearance around the Christmas and New Year holidays. In many New England restaurants, you will see lobsters offered with a baked stuffed option. I prefaced, in restaurants, since bake stuffing the lobster is not the most appealing option for most home-cooks. The reason for this is the lobster must be killed before stuffing and cooking it. How is it done you ask? The lobster is placed on its back exposing its underbelly and a large sharp knife is brought down quickly and driven through its thorax. For this main reason, the baked stuffed lobster is usually left to be prepared by chefs in restaurants.

For us living here in North Carolina, lobster is one of those foods that shows up on a special occasion. We enjoy it a few times per year, we have it shipped in from New England. The lobsters now arrive by FedEx in big Styrofoam coolers instead of being picked up at the dock. The lobster companies have the shipping process down pat. Many of them ship all around the country.

When the lobsters arrive we remove them from the overnight packaging and they get put in the refrigerator with damp (not wet) newspaper until we are ready to cook them. I recommend cooking them the same day or the next day. We have purchased and shipped with The Lobster Guy owned by Captain Tim Handigan, shown in the picture above. We have also ordered from Sea Salt Lobster, in Saco, Maine and both have been wonderful.

Our cooking process involves several big pots on outdoor burners, add in a bottle of beer, a couple of small onions, and a little crab boil seasoning. Get that water rolling and drop the lobsters in headfirst. This is the most humane way to kill them, as soon as they hit the water they die. You should add them one at a time so they do not bring down the water temperature. Cook the lobsters in the water for approximately 15 to 20 minutes unless you have very large lobsters over three pounds, they would need more time. You will know your lobster is nearly cooked when the shell color turns from the blackish-green color to a reddish-pink. According to The Lobster Guy, if you are not sure just give a tug on one of the antennae, if it releases without pressure your lobster is done.

Why Are Lobsters So Expensive?

Aside from the overnight shipping costs, lobsters are pricey for a few reasons.
1. The investment in the equipment needed to be a professional lobsterman. A used 20-25-year-old lobster boat could run you well over $150,000. Not to mention all the other equipment and gear that is needed to keep a crew efficient and safe. Which brings me to the second reason that lobster is pricey.

2 The danger involved in the profession. Fishing is a very dangerous way to make a living, the sea, and the weather, along with so many other factors that can go wrong. Captain Tim, The Lobster Guy, was actually featured on A&Es Deadliest Catch, Lobsterman. While researching his website we came across this video where he tells his story of his near-death experience out on the ocean on that fateful day in 1991 when the entire crew from The Andrea Gail sadly lost their lives due to a brutal NorEaster storm. In the Hollywood movie, A Perfect Storm, George Clooney plays the Captain and tells the story of how the Andrea Gail sank with its entire crew on board. Captain Tim from The Lobster Guy and his crew were rescued during that same storm, that very same day. It is chilling to hear this lobsterman tell his story of his Perfect Storm. We are so grateful for all these brave folks who are called by the sea and risk their own lives in order to bring the treasures of the ocean to our shores and our tables.