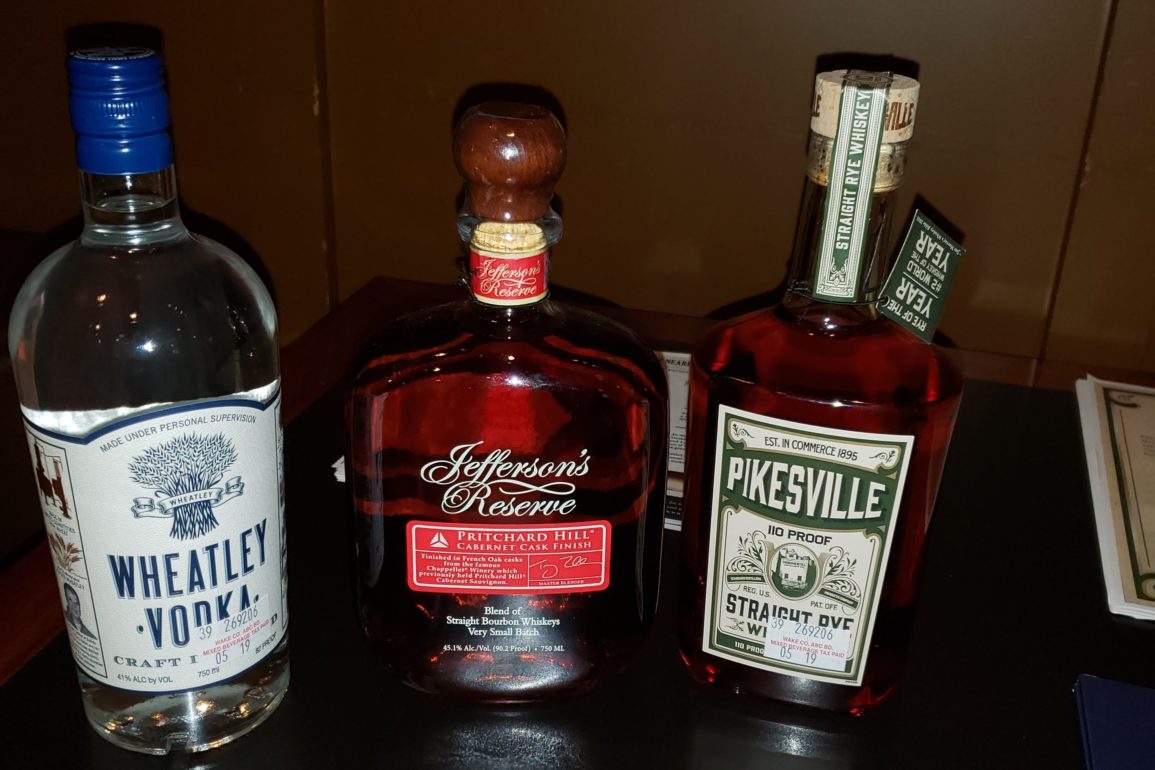 The Whiskey and Beef Dinner

We are big fans of beer and we have lived in the Wake Forest area of NC for several years but much to the surprise of our beer-drinking friends we had never visited Real McCoys. This place is known for its large beer selection, full bar, and food service until late into the night. The name is cool but we wondered where it was derived from. A source told us that the original founder of the establishment’s first name was Coy. Good play on the name- well done!

Looking at the Untappd app we could see that they had many beers that both my husband and I would enjoy. We pulled into their parking lot on Memorial Day Saturday to finally check it out.  It was not too busy as most people in this area scramble for the coast to enjoy the first great beach weekend of the season.

None the less we were greeted by an energetic and enthusiastic staff, who was eager to have us explore the beer selection and try their infused vodka and Bloody Mary mix. Which by the way was so wonderful, I went back the next day for one.

While we were enjoying our refreshments they told us about an upcoming whiskey/bourbon pairing dinner to which they were selling tickets. We jumped right on that train and purchased two seats for the upcoming event.

The evening of the event we were greeted by Ben Thomas who is one of the new owners. He had entered into the business approximately eight months ago. My understanding is that Ben has lots of experience in the bar business. Been explained to us that this was the first in a series of dinners he hopes to provide that will educate the patrons on spirits and food. He introduced the co-hosts for the evening, one representing the spirits we would imbibe and the other was the beef purveyor. He also introduced us to our server for the evening who was wonderfully attentive.

The first surprise of the evening was the first drink, it was not a bourbon or whiskey, but rather a vodka. Served in a tall glass with ice was a Wheatley Vodka Gimlet. I was skeptical at first and so were my fellow diners. Ben assured us it would all be made clear in just a few moments, and it was. Apparently this vodka was special and tied to whiskey because it is aged in whiskey barrels. Ah… that made sense. Its smokiness and bite paired beautifully with the first course which was a sirloin steak egg roll cooked perfectly by Chef Eddie. My hopes were up for the rest of the evening!

Chef Eddie took a moment out from his duties in the kitchen to introduce himself to us. He was perfectly quaffed, pressed chef uniform and a wonderful smile. He was modest in front of the group and let us know his culinary credentials. Along with that, he explained he is from Kentucky which we all know is where you can tour the Bourbon Trail.

Speaking of the Bourbon Trail for those who do not yet know all of the details of this adventure, I am doing the research so my husband and I can make the trip. Stay tuned for a blog post all about it upon our return.  From what I can tell, the tours are similar to some that we have been on in wine country. They are well prepared with tour transports to move you from one place to another and how many you visit all comes down to how much time you have. I would imagine some of the lengths of the tour you select will depend on how much tolerance for alcohol you have.

The official start of the Bourbon Trail is in the State’s capital, Louisville at the Frazier Museum. In Louisville, you can experience Michter’s Fort Nelson Distillery, Evan Williams Bourbon Experience, Old Forester Distilling Co., Angel’s Envy Distillery, Rabbit Hole and Bullet. Or if you are pressed for time skip straight to Bardstown so you can experience Heaven Hill, Four Roses, Makers Mark, Lux, Jim Beam, and others. For those more adventurous bourbon drinkers, there are many craft distilleries in the Northern parts of the state too.

Back to the Steak and Whiskey Dinner at Real McCoys. Our next pairing was a Jefferson’s Reserve Pritchard Hill Sherry with Asian BBQ Grilled Sirloin, Balsamic-Glazed Brussels Sprouts, and Jasmine Rice.  While we ate we listened to the beef purveyor tell us all about the cuts of beef and where it is sourced from. We learned that this particular beef farm only uses white cows. The reason is cows do not like to be hot and the black cows attract the sun and make them uncomfortable. Apparently the white cows are happier cows and happier cows make better meat.

Our next pairing was the main course of a perfectly cooked Prime Rib of Beef served with a side of mashed sweet potato and locally-sourced, lemon broccoli and to sip with this lovely plate was a Pikesville Rye. We filled our bellies on the nicely-salted medium-rare red meat and sipped on the rye. I started to fall into a warm food coma. The representative from the distilleries was taking us through some of the finer points of distilling and the differences in grains used in the process. He fielded our questions and told us that he had a very special whiskey up next that has a wonderful story. He would be showing us a short film about the whiskey and its deep American history. We could not wait!

Ben checked in to see how things were going and asked if we were enjoying the evening he and his staff had prepared for us. To which we all replied a unanimous “yes”!  He said not only will we be tasting this next special whiskey but it would be served with a chocolate whiskey cake. What makes this story even better is that the cake was not prepared by his chef, but rather his catering manager, Missy. He said he discovered by accident a few months back, that Missy was a fantastic baker. You see, she found out that no one made Ben a cake for his Birthday and she kindly surprised him. That day he was blown away at how good it really was and deemed her the official pastry chef for the restaurant. Missy still manages catering too so make sure you reach out to her if you are looking for a spread for your next event. Be sure you order something sweet from her too or you will be missing out on what I thought was the best cake I have had in a long time. Yes, and I bake.

I have made you wait in anticipation long enough. Now I want to share the story of the wonderful Tennessee whiskey that we enjoyed with Missy’s chocolate-whiskey cake topped with a whiskey ganache. It was called Uncle Nearest and the film told a story that goes like this: Uncle Nearest, born as Nathan Green, was the first African-American Master Distiller on record in the United States. He was born a slave and was later a free man. Nathan worked on a farm for a preacher making whiskey. A young orphaned boy came to live in the house with the preacher and was curious about what Nathan did. He taught the young man everything he knew and that young boy grew up to be known as Jack Daniels. Now Uncle Nearest’s whiskey is being independently sold. According to the website Caskers, this handcrafted whiskey is distilled using an 11-step, 25-day process and a bespoke charcoal filtration method. It was named “1 of the Top Five Whiskeys in the World” by the Cigar & Spirits Magazine in 2018

This whiskey was 100 proof and the color of a beautiful rich-wood and on the tongue a slight taste of spice that ends with maple and caramel. I took my first sip but had to add an ice cube as my brown liquor palate is not yet as sophisticated as this whiskey. Once I had a cube in the glass I was 100% involved in the sips that accompanied Missy’s chocolate cake.

What a wonderful evening; we were entertained, educated while satiating our palates with rich beef and wonderful spirits. Thank you to Ben, his co-hosts, and his amazing staff for creating a wonderful evening out. We can not wait for the next one. I will keep you posted on social media as soon as I get wind of it! Follow us on Instagram or Facebook for the update. 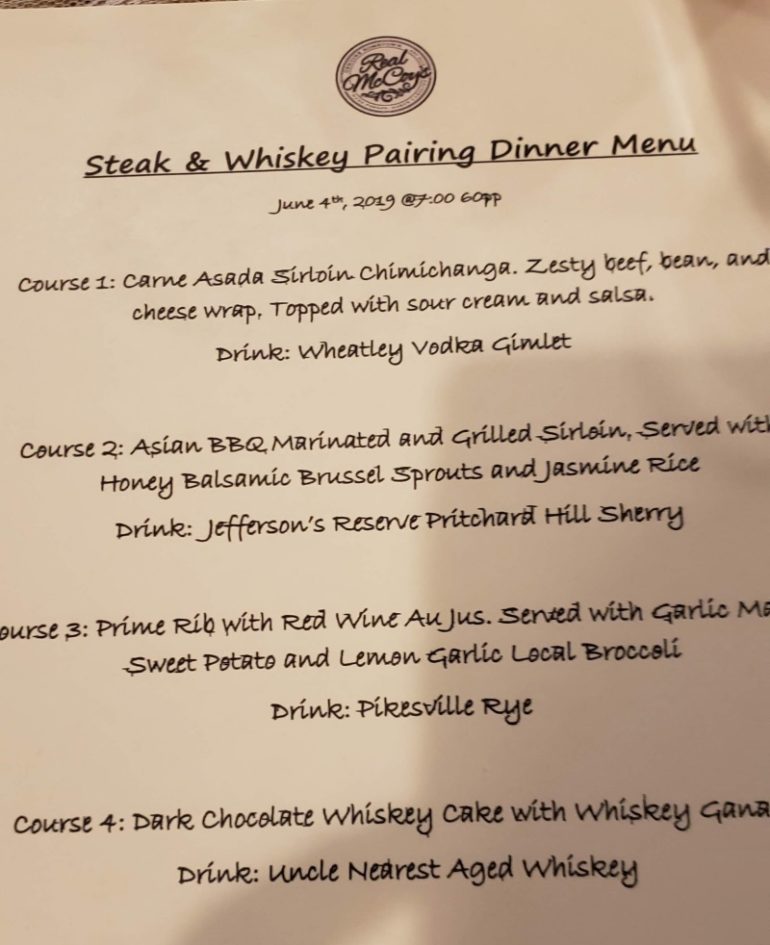 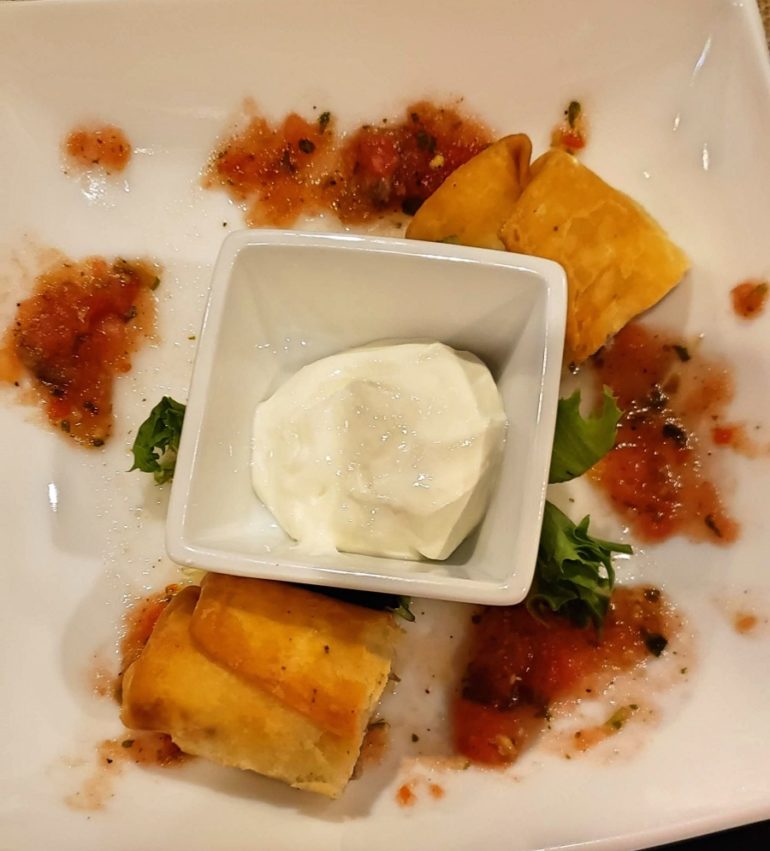 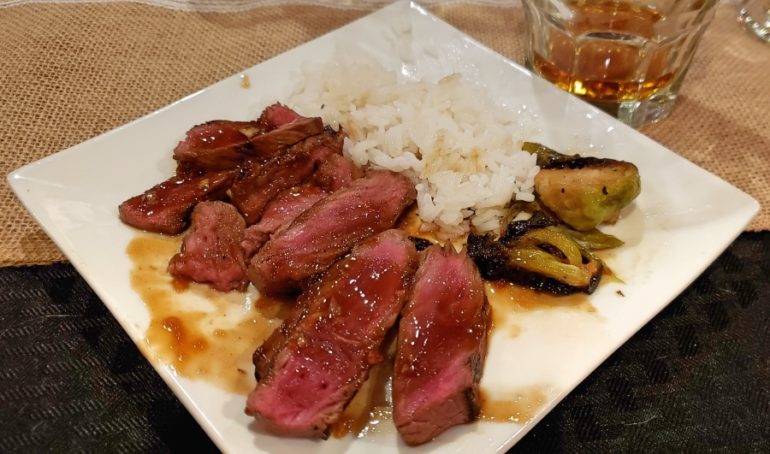 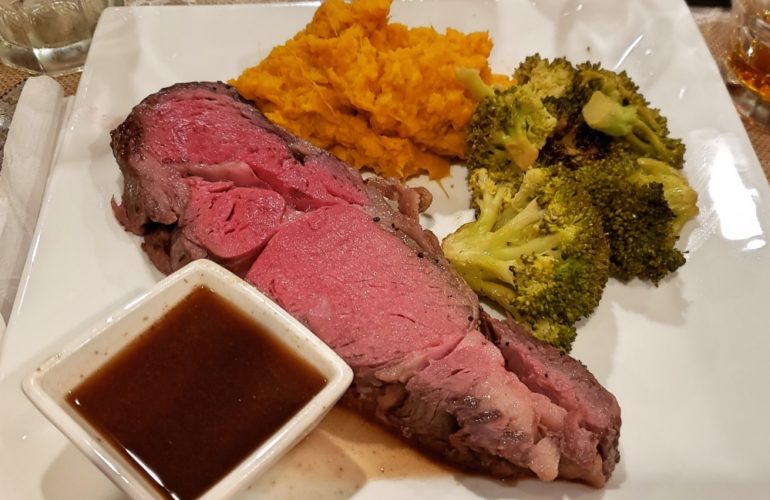